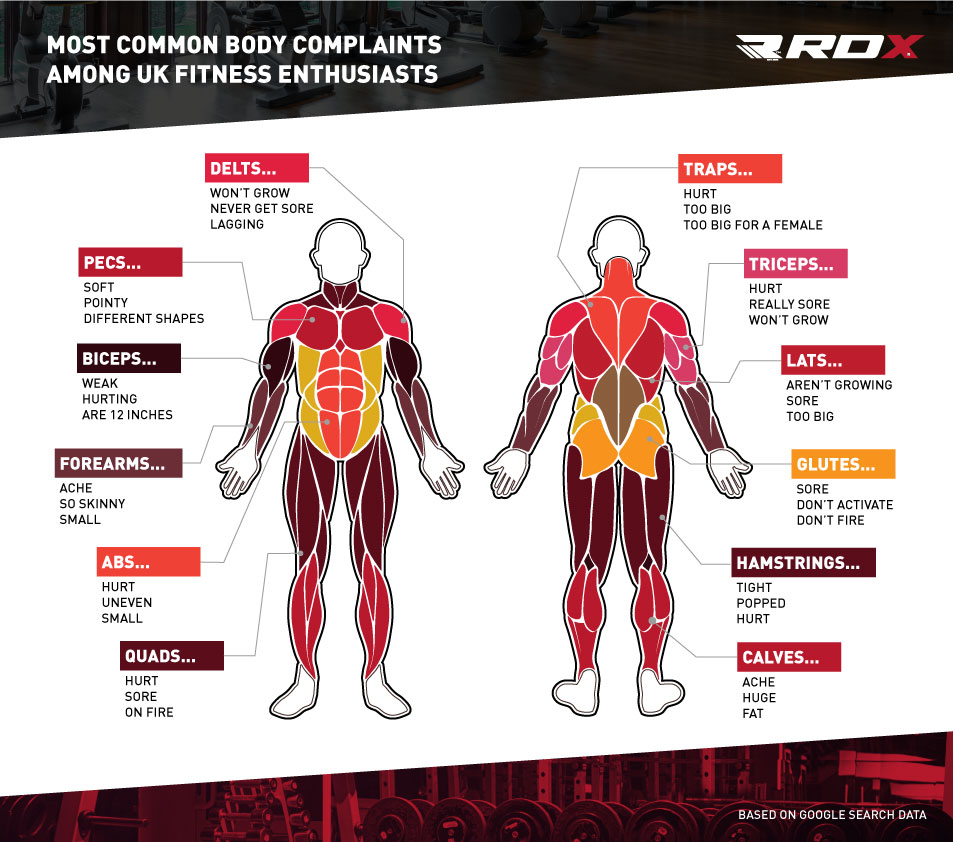 A new study by RDX has revealed the surprising and often unusual insecurities UK adults have about their bodies.

Using Google autocomplete data, our study team were able to determine the most common search terms for different parts of the body as they relate to fitness training.

Most common sources of pain

The study team entered the word “my” followed by each major muscle or muscle group and recorded each suggestion Google’s autocomplete function made.

For ‘my... triceps’, ‘biceps’, ‘traps’, ‘quads’ and ‘abs’, Google suggested “hurt” - revealing that a lot of UK adults are experiencing unexpected pain after training.

Soreness was a trend too. The top autocomplete suggestion for lats and quads was “is/are sore”. Although interestingly, the second most common search for delts was “my delts never get sore”.

As well as queries related to post-workout pain or soreness, the team identified some other interesting trends.

Triceps, lats and delts are the largest source of frustration for people looking to grow their muscles, according to the data. Google returned the suggestion ‘won’t grow’ when the researcher entered ‘my triceps’, ‘lats’ or ‘delts’.

Body parts that are too big

It’d be easy to assume most gym-goers are intent on enlarging their muscles, but when it comes to traps and lats, big isn’t always beautiful.

Some of the queries Google recommends suggest that users have been looking for answers to more unusual body queries.

According to the data, the most common concerns about pectorals or ‘pecs’ is that they are soft, pointy and differently shaped.

Glutes, the collective term for the three main muscles located in and around the backside, cause the most concern when they don’t activate or ‘fire’. This means that the surrounding and adjacent muscles are recruited to perform more of the exercise, resulting in less definition and growth in the gluteal area.

Pro tip: If you’re finding that your glutes don’t fire or activate when performing squats or in fact any other exercise that targets the gluteal area, try doing some targeted warm ups.

Weighted leg lifts, donkey kicks, glute bridge and body weight squats are a great way to activate those glutes and optimise your workout.

"Psychologically, there's no reason to assume men are less concerned about their body image than women. Both men and women have evolutionary reasons to want to be perceived as physically attractive, although the definition of attractive varies and evolves as societal norms change.

"In fact, there's evidence to suggest that men are more concerned than ever with body image.

"Interestingly, and perhaps sadly, one of the most common body image worries men have is their height, one of the very few physical characteristics that can't be altered.

"Men and women are exposed to similar influences when it comes to how they feel about their bodies. The media, interactions with friends and family and - increasingly, social media - can all play into how positively or negatively a person feels about their own body. But the main influence on body image is the individual's own propensity for being self-critical."

Jamie Knight, Head of Research and Development at RDX, believes some gym users may be suffering from unrealistic expectations.

“It’s great to set goals, they’re fundamental to getting the body you deserve. With hard work, the right approach to training and nutrition, you can hit or even exceed them.

“But as our study shows, a lot of people remain unsatisfied with how their training is going, with underdeveloped muscles, pain and asymmetry as particular causes for concern.”

“Our advice would be to focus on progress, strength and mobility, rather than aesthetics. Use metrics that are trackable, as well as looking in the mirror. If you can lift more or run further now than you could last month, you’re winning."

By monitoring Google’s autocomplete suggestions, which are based on previously entered search terms, the data team were able to see what people had been searching for relating to muscles and muscle groups.

Google’s autocomplete suggestions do have some real time data and in some cases, Google suggests search terms that are based on what’s happening now.

In other instances, Google makes suggestions based on historical search volume. We used five separate devices, four different web browsers (Internet Explorer, Google Chrome and Firefox and Apple’s version of the Google App) in order to get a broader sample of data.

To get a more accurate picture on the whole, we conducted searches over a three-week period which ran from December 24th 2017 to January 3rd 2018.

Fitness Gym Design Layouts - All You Need to Know [With Examples]

Having a well-designed fitness center is the key to a business’s success as it will help in attracting and retaining your...

How to Enhance Your Existing Gym Facility to Boost Gym Revenue

As a business owner, the revenue you generate from your business determines how long you can continue providing gym services to... 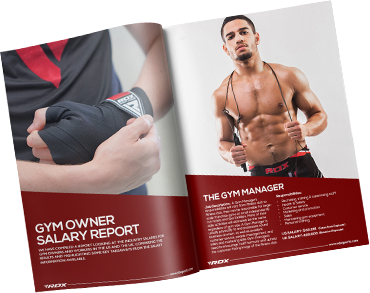